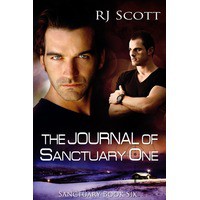 This story is part of a series and must be read in order. Jake has plans of spending Christmas at Sanctuary One with his brother and his partner when snow stops Kayden and Beckett from travelling, now Jake looks forward to a Christmas alone when he is surprised by an unexpected guest. Sean has to lay low and the only place he can go is Sanctuary One, after seeming to have betrayed all around him he has no-one to turn to, but surprising Jake at the cabin he just might be able to turn things around and when he can disclose his secrets he wants to make Jake his own.

Finally we get to see Jake’s story and find out the truth about Sean, is Sean really a traitor? Jake has devoted his life to Sanctuary the company that his father set up, when he discovered that the FBI contact Sean was the leak he was gutted for more reasons than one, finding Sean on the doorstep of Sanctuary One means he can start digging for the truth but what he learns shakes him to the core. Sean has been playing all side because of a promise he made, he wasn’t supposed to get as close to Jake as he did but he couldn’t help himself, now he has the chance to convince Jake of the truth but can Jake forgive him?

This is great story where we finally learn the truth about Sean’s betrayal; we see how Jake was hurt by the deception and how both Sean and Jake are meant for each other. The storyline is brilliant as we see the way that the connecting lines from all the previous books are wrapped up; we finally get to see the Bullens tied up in their own web. The feelings between Jake and Sean are quite intense, with the longing on both side being tangible but both holding off because of the circumstances but as soon as it is clear they are wonderful together. Both these men have struggled with their circumstances, both longing for the other but with Jake unaware of the reason why Sean held back.

There’s danger, hot sex, more danger and the truth being told, a great storyline and a wonderful ending for two stubborn men, so really what are you waiting for?