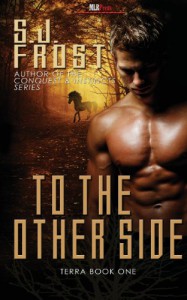 Garrett takes his job with the EarthQuest Foundation seriously, as a biologist and environmentalist it’s his job to discover secrets of the wild lands to help to save them from destruction. Looking for anything to save a temperate rainforest in Washington brings him to a startling discovery, a Kermode spirit bear making its home in the forest and that is just the beginning of the discoveries. Bryson is a witch and the Gatekeeper between the two worlds of Terra and Earth, he is part of both worlds and as such is torn between the two, rescuing a man from the bottom of a ravine begins to give Bryson hope that he has met a man who could understand him.

This is a wonderful fantasy that brings two worlds together while keeping them strictly separate. Garrett is thrown into a world he never knew of when he is rescued from the bottom of a ravine, discovering a fantasy world with Dragon’s, Brownies, and Unicorn’s and so much more but the most important thing he discovers is love. Bryson has been torn between two worlds for several years, he loves Earth but he also loves Terra and the destruction of the forest on Earth would destroy the Gate. Bryson and Garrett are attracted to each other and it’s an attraction neither man can ignore, working together they come up with a plan to save the Gate but someone from Terra wants the Gate for themselves and while Garrett is on Earth trying to save the forest Bryson has a fight of his own on his hands.

I absolutely loved this story and the way it was written, the descriptions of Terra were wonderful and I loved that it was a medieval setting with mythical and mystical creatures. Earth is just portrayed as Earth with the typical political money grabbers and the environmentalists trying to thwart them. Although the Earth side has an important part to play, the Terra side is where nearly everything plays out and we are introduced to some very interesting Terra characters and their animal friends. I loved how even the animals were something special, I mean a dragon who loved to read romance books and loves Oreo cookies, how can you not fall in love with them?

The relationship between Garrett and Bryson is stretched out over the course of the book and they both realise quickly that they want to be together, they just have to decide the details and make the commitment and admit it to each other. Although the saving of the forest on Earth is interesting, it was what was going on in Terra that really held my attention: a duke who has his eyes on power and immortality and a dark witch who just wants immortality and the lengths both of them will go to get it. There’s excitement and danger, a wild ride on a unicorn, tiny dragons spewing fire, magic and a grouchy brownie, this is an absolutely brilliant story.

I have to recommend this to those who love fantasy, parallel worlds, brilliant characters, finding love in amazing places, evil intentions, facing death for love and a wonderful ending… oh and some very hot sex.